Chemical processes today usually run with catalytic support: Catalysts accelerate reactions or even make them possible in the first place, and do so without changing themselves. In heterogeneous catalysis, the catalyst and the reaction partners are in different “phases,” as chemists say, i.e. states of aggregation. 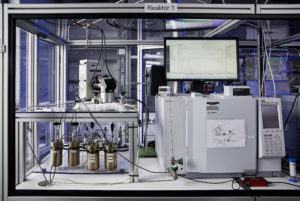 The term catalysis was coined by Jöns Jakob Berzelius in the 19th century when he discovered common features of quite different chemical reactions: for example, the dehydrogenation of alcohols to aldehydes on glowing metals or the decomposition of ethanol to ethylene and water on alumina. In addition to starting materials and products, there is always another substance involved that apparently does not consume itself.
A classic example is ammonia synthesis, which secured the world’s food supply a good hundred years ago after the natural source of nitrogen fertilizer, nitric acid, ran out. The Haber-Bosch process “harvests” nitrogen from the air for fertilizer production, and does so by “cracking” the dinitrogen molecule (N2), a form that most plants cannot process, using hydrogen and an iron catalyst.

Today’s tasks of heterogeneous catalysis include, for example, moving carbon dioxide from the air to meaningful chemical reactions and thus, in a sense, turning a climate killer into a raw material. Such work can gradually replace the current fossil-based economy – coal, oil and gas – and place chemistry on a new, green, basis: namely renewable energies and renewable raw materials.